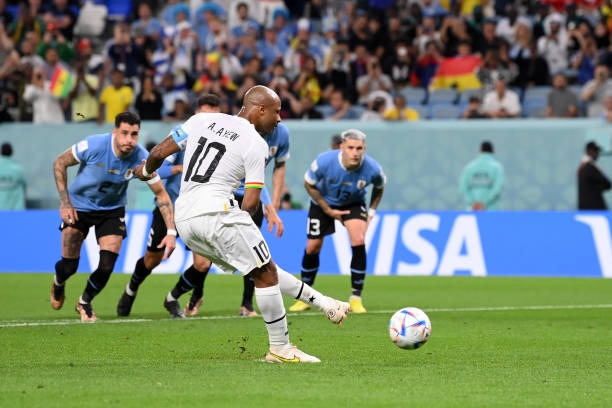 After 12 years of living in complete dismay when the Black Stars lost on a penalty kick to Uruguay in the 2010 World Cup in South Africa, Ghanaians were optimistic that, the Black Stars were going to turn things around and rewrite history.

Black Stars missed a crucial penalty kick awarded to them by the former captain, Asamoah Gyan when the South American side forward, Luis Suarez cleared the ball off the goal post with his hands in the last minute of the match.

This penalty miss brought shock to the entire nation and the love for the Black Stars was sent completely down the drain.

The former Black Stars captain Asamoah Gyan also lost the love Ghanaians had for him and he has since lived in regret after missing that kick.

In light of the ongoing FIFA 2022 World Cup in Qatar, Ghana was lucky to place in the same group as its rival Uruguay alongside Portugal and South Korea.

It seemed the love of the Black Stars revived as Ghanaians were looking forward to playing a revenge match against the South American side who denied Ghana’s victory of securing a spot in the semis of the 2010 World Cup.

They also denied Ghana’s victory of becoming the first African team to qualify to the semifinals of the World Cup.

The Black Stars played their opener with the Portuguese side and lost to 3-2.

They then proceeded to play their second group-stage match against South Korea which they came out victorious.

The win boosted the confidence of the Black Stars and Ghanaians were optimistic that the team will progress from Group H after beating Uruguay.

The long-awaited revenge was finally here when the Black Stars met with Uruguay on Friday at the Al Janoub Stadium to play their last group-stage match.

This match was a very crucial one and was supposed to be a win-and-revenge match for the entire Ghanaian populace.

The match started and within the first 20th minutes, Black Stars was awarded a penalty.

At this time, the whole nation was still waiting for the Black Stars to net the goal post to give Ghana a 1-0 lead over Uruguay.

Then came the captain of the Black Stars, Andre Dede Ayew who stood tall behind the ball ready to score and secure his team in the round of 16 of the World Cup.

Andre Ayew then kicks the ball into the left side of the goal post but the keeper for Uruguay was quick enough to clear the ball.

After missing the penalty, Uruguay then took the advantage to punish the Black Stars in the 26th minute of the game. Giving them a 1-0 lead over Ghana.

Uruguay after scoring then advanced more to punish the Black Stars by scoring in the 32nd minute of the game, giving them a 2-0 lead over Ghana until the referee blew the last whistle to end the game.

The much-anticipated revenge match Ghanaians have long for has now gone down the drain.

History has once again repeated itself. The Black Stars have lost a penalty at the crucial stage of the World Cup tournament once again against their rivals.

Ghanaians would not have felt the pain more if a different person from the team missed the penalty.

But as I already announced, history has repeated itself again. It was again the captain who missed the penalty kick.

How are Ghanaians supposed to get over with this? Two captains in the history of Ghanaian football have missed a crucial penalty which was supposed to give us hope and progress us into the next stage of the World Cup tournament.

Should it always be the captains taking the penalty kick for the team? Or is it that they take it upon themselves as leaders to take the blame if it turns out the other way?

Well, Ghanaians should be enraged with the Black Stars captain, Andre Ayew for missing the penalty kick.

How can you miss a penalty at this crucial stage when playing against a team who denied you a victory 12 years ago?

Penalty kicks do not always turn out to be positive but that should not have happened like this for Ghanaians, knowing that scoring the goal would have brought some sought of confidence to your teammates and Ghanaians.

Well on social media, there have been reactions and Ghanaians have also expressed disappointment with the penalty missed by the Black Stars captain.

A leader who we all looked up to has disappointed his teammates and the nation.

On social media, Ghanaians have now plunged onto Andre Ayew, giving him the same treatment they did 12 years ago to the former Black Stars captain, Asamoah Gyan who missed a penalty kick in the 2010 World Cup against Uruguay.

As it stands now, Ghana is out of the Qatar 2022 World Cup after losing to Uruguay who also missed out on the round of 16.

Ghanaians do not know when this opportunity will present itself again to claim victory over our long time rivals since they have once again sent the Black Stars packing in the ongoing Qatar World Cup.

The writer is an online journalist and a freelance graphic designer with The Multimedia Group.