Orange Democratic Movement party leader Raila Odinga on Friday, December 9, denied claims that he was coerced into making the decision to call off the planned parallel Jamhuri  Day celebrations at Jacaranda Grounds.

While addressing the Jumuiya ya Kaunti za Pwani summit in Tana River, Raila reiterated that nobody could instil fear in the opposition and that he only postponed the rally to attend a global summit in the United States.

He stated that he would jet out of the country on Saturday, December 10, to attend the USA-Africa Summit following an invitation from President Joe Biden.

The ODM Leader revealed that he was slated to address the summit bringing together Heads of State from Africa in his capacity of the African Union High Representative on infrastructure. 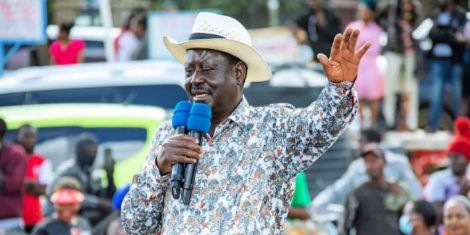 Azimio Party leader Raila Odinga during a rally in Utawala on Sunday, December 4, 2022.

“I cancelled the Jamhuri day rally after I got an invitation from the US government to travel to the US tomorrow for the US-Africa Summit. Some people are now saying that I was cowed. I do not fear any human being,” a firm Odinga stated.

“I was invited to address presidents and investors on opportunities in the infrastructure sector,” he stated.

In addition, Odinga reiterated his earlier position insisting that his coalition, Azimio la Umoja, had won the August General Election.

His statements came after reports alluded to a deal that prompted the Azimio leader to make the abrupt u-turn on the planned rally.

The reports indicated that sources close to Odinga and President William Ruto divulged that the proposal to entrench the Office of the Official Leader of Opposition played a factor in the decision to abort the Jamhuri Day rally.

The decision to call off the rally was announced by the Leader of the Minority in the National Assembly, Opiyo Wandayi, a day after opposition leaders asked their supporters to turn out in a show of might at Jacaranda Grounds.

Despite the explanation issued in the announcement, the move to call off the rallies sparked a debate and speculations as to what could have changed in less than 24 hours.

On Thursday, Azimio Youth League Chairman Solomon Kuria announced his resignation, citing the postponed rally as one of the reasons.

In his resignation letter, Kuria claimed that the postponement of the rally was an indication of eroded values within the party. 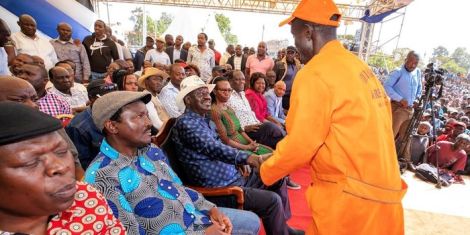 Azimio Chief Raila Odinga interacts with a Kenyan at the Kamukunji Grounds for a consultative forum on Wednesday, December 7, 2022.