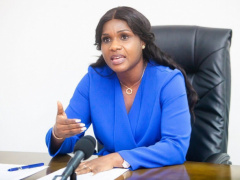 “The census data allows us to have indicators for monitoring and evaluation of national agendas. The census allows us to know the social situation of all Togolese”. The statement was recently tweeted by Sandra Johnson, Togo’s Secretary General of the Presidency, who was referring to the 5th general housing and people census (RGPH5) underway in Togo.

Sharing the belief that the census is crucial for socio-economic development, Johnson urged those who are still hesitant to take part in the operation to do so.

“Let’s make this operation a success, by welcoming census agents warmly,” she added.

The census ends next Saturday, November 12. It will help collect data on the population, data which will help the government plan “public actions aimed at reducing poverty and improving living standards in areas like health, education, employment, access to electricity and water, etc.”

Overall, nearly CFA9 billion was poured into the census, according to official sources.

Togo: Lomé will host the next Africa Financial Industrial Summit this month

UEMOA: Togo is no longer the country with the cheapest ISP offers (ARCEP)

Which bank has the most customers in Togo?