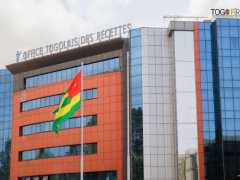 From January to September 2022, the Tax Office (CI) and the Customs and Indirect Taxation Office (CDDI) of the OTR – Togo’s higher tax authority – collected CFA646 billion in taxes. This amount represents 79% of the OTR’s target for the year, which is CFA814 billion.

This was disclosed by the Ministry of Economy and Finance in a recently published report covering the execution of the State budget up till the end of September 2022.

In the first semester, the OTR collected CFA409.41 billion. Between July and September, it collected CFA237.34 billion.

The amount mobilized in the first nine months exceeded that obtained over the same period in 2021: CFA 563 billion.

There are also revenues from duties and taxes on foreign trade and international transactions, which stood at CFA151 billion between January and September this year.

Togo: Export of transport services earned the country CFA111 billion in 2021, up by 6% YoY

Togo: Loans to MSMEs on the rise but still not enough