As the year is coming to an end, LUSH HAIR sees it as the perfect time to reward and celebrate its numerous loyal customers across the country by launching its first nationwide consumer promotion tagged ‘’BRAID TO MILLIONS’’.

LUSH HAIR confirmed that the rationale behind the promotional activity is to reward and appreciate its customers for their loyalty from now into the holiday season. And the goal is to ensure that everyone who makes a purchase of Lush Hair braiding extension during this period receives a guaranteed special gift.

10 luck winners will stand a chance to win 1 million naira each, as well as loads of other interesting gifts up for grabs such as electronic gadgets- Smart phones, television, home appliances: deep freezer, generator, food stuff and the grand prize of a brand-new car for the luckiest winner.

To participate in this exciting promo, purchase any pack of Lush Hair braiding extension i.e Wow Braid, Ready Braid, Mega Braid or Jumbo braids. Open the flap and scratch the panel to reveal a unique pin. Text the unique numbers to 38353, expect a feedback message containing another unique set of numbers, copy out the numbers along with the alphabet “S”. Dial *406*6#, then press 1 and enter the unique numbers copied earlier, automatically the phone will be credited with a 100mb data. This only applies only to MTN subscribers.

Shortly after this, another message alert might come in to reveal more gift that has been won, in this event, the customer care line (0700-5874-4247) should be contacted. 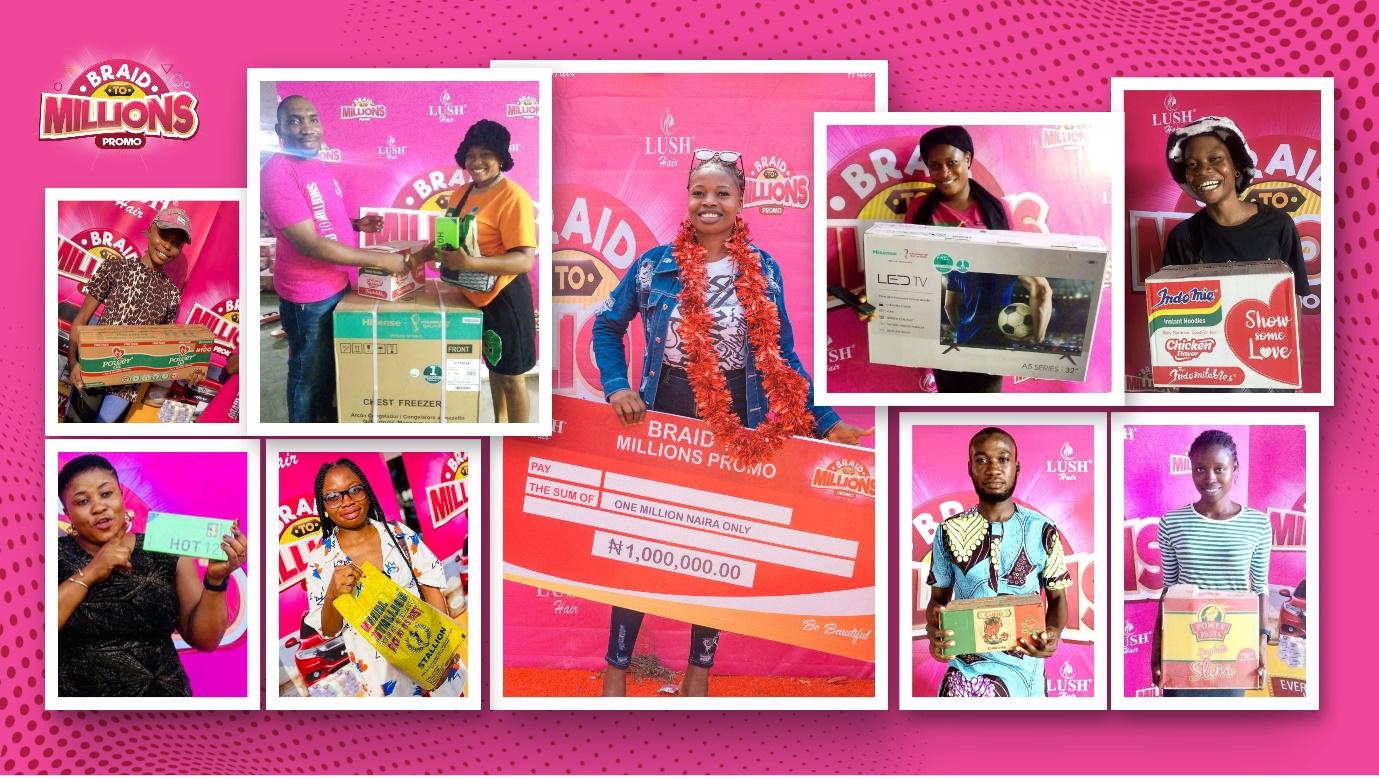 Faces of winners in the Lush Hair Braid to Millions Promo

For easy prize claim and pick-up, redemption centers have been established at strategic points across different cities nationwide.

According to Ms. Damilola Agboola, the Assistant Brand Manager, Lush Hair “as the holidays draws nearer, we are happy to put smiles on people’s faces as every of our customers deserves to be rewarded and appreciated in a special way for their unflinching loyalty to the brand, and this season comes as the perfect time to do that”.

“And the catch is, in this promo everybody is a winner, because for every pack of any of our braiding extensions purchased, the customer receives a guaranteed free 100mb MTN data while equally standing the chance to win from other mega prizes” she stated.

Currently, Millionaires have begun to emerge, and winners of other fantastic prizes have equally been redeeming their prizes nationwide, and the opportunity to win many more remains open till December 15th when promo closes.

I am open to dating a fan – Actress